A little bit about my design philosophy
My name is Masataka Hamada. I am a developer, and I have been involved  with “sound” for more than half a century!
As I am approaching my 70th birthday this year, I decided to gather together the knowledge and experiences that I have gained until now, and write them down in a way that is as easy to understand as possible. I am an engineer, so I am not very good with words, and some of it may be a little difficult to understand, but please take a look at what I have written.

First of all, everyone is aware of afterimages that occur in a picture on a TV screen.
Just to explain this to you, an afterimage on a screen occurs when the camera quickly pans, and for a brief time the image remains on screen, and then disappears like a ghost. When this happens, you are aware of the afterimage, aren’t you?

Many still find it hard to understand the concept of ‘reverberation’ (sound distortion) in terms of acoustics.
When you are trying to listen to an announcement in a gymnasium, you will often feel that it is hard to hear clearly because of the reflected sounds. This is reverberation. This same phenomenon also occurs during lectures, concerts, and events, for example.
From the moment when a sound is picked up by the microphone, until it emerges from the speakers, many reverberations occur,  and it is a fact that the sound we hear is far removed from the original sound.
Please refer to the conceptual diagram of distorted sound (Fig. 1).
The phenomena which generate reverberation are so incredibly numerous, they are hard to understand. I refer to reflected sound, reverberation, etc. collectively as ‘sound distortion’, but my aim is to take each one individually, to understand the phenomenon, and then to eliminate it, or reduce it as much as possible.
Sound distortion arises due to various parts and factors. When I find a large distortion, I make it my priority to improve it.
I’ve been asked by several people why they can’t hear any difference when they change to a good quality cartridge, having been told that it will improve the sound. Because they are still hearing large sound distortion from other parts of the equipment,  rather than from the cartridge, simply changing the cartridge to a better one does not improve the sound. If you read my design philosophy, you will find the answer to such questions. 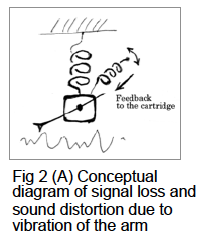 (Fig. 2A: Vibration of the cartridge gives rise to electric signal loss)
The loss makes the arm vibrate, and the reflected sound produced by the vibration returns to the cartridge as reverberation, and it is played back.(See Fig. 2B)

An explanation about the properties of materials
Amongst the materials which have a large mass, and are soft, we have lead. Lead has a large mass at low frequencies, but at high frequencies it becomes a sound absorbing material like rubber, so sound information is not transmitted, and becomes loss. 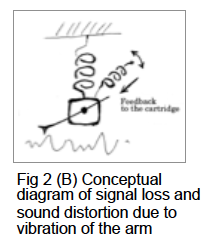 Alternatively, what about a glass-like material? Certainly it remains hard even at high frequencies, its resonance is intense, and resonating sound returns to the cartridge as reflected sound.
(See Fig. 2B), where the signal resonated by the vibration returns to the cartridge. This will also be described later in Fig. 7C)
In the audible range from bass to treble, to convert sound into an electric signal without loss, we need to use a heavy and leak-proof mass to block the pathway along which sound is transmitted.
Stainless steel 304 is such a material – it is both hard, yet ductile, and combines these conflicting qualities in just the right way.

However, when you use stainless steel, not all the results are good. If you make stainless steel material thin or light, or make the cantilever section of the arm into a needle shape or a blade shape, this affects the sound. I have tried using a pivot type bearing, but the outcome is poor. You have to increase the number of ball bearings, and bring them as close to the surface as possible. To make spot contact where you join parts to each other also affects the sound. If you bond the joints with adhesive, the adhesive becomes a damper.
As I mentioned earlier, stainless steel has characteristic vibrations in its various forms, and because it is hard, sound distortion is transmitted directly, without being altered.
Thus, if we construct a structure that improves the rise, isn’t it also clear that the sound distortion becomes more obvious? If you do not establish a vibration-damping / vibration-absorbing structure that improves the sound distortion, you will hear the distorted sound return to the cartridge as reflected sound. In order to bring it closer to “original sound”, I have been continuing to develop a finely-tuned balance between the positive rise and the sound distortion.

The main pathway that conveys vibration loss. (Here, the main pathway is not the path of the electrical signals that carries sounds from the record and transmits them until they exit from the speakers, but refers to the sound pathway of flowing mechanical vibration signals.)

Effect of series damper structure on sound
A series damper is a structure in which the material of the headshell itself is made of carbon or aluminium, the material of the arm pipe itself is carbon, aluminium or wood, and floats on rubber which is used to support the bearings of the cantilever of the arm, or is fixed with adhesive; in other words, the structure itself becomes a damper. (FIG. 5). And this damper causes a great deal of loss in the electric signal of the sound.
If you place a damper in series in this way, namely, when you place such a structure in one place on the main pathway, the “transient characteristics” will be poor, and the sound will become muffled.

Actually, this series damper structure is also used for cartridges. If the cartridge case is connected with a soft material such as ABS plastic or aluminium, the sound will surely be at the level of that material.
If a sheet of rubber is placed underneath the record platter, the sound distortion will be low, but the rise will deteriorate. This is also a series connection. In the past, we used materials like rubber to eradicate resonance distortion such as flutter, but in pursuit of “original sound”, I think that we should use stainless steel.
In order to improve the rise, we must connect the various parts using a hard material, and if we mould the vibration absorbing material so it is attached to the vibrating section, in this way the distortion component is absorbed. This is a parallel damper structure.
To be more specific:
1.Add rubber or carbon to the surface of the head shell (Fig. 4A, Fig. 7B).
2.Snugly line the inner surface of the arm pipe with felt or carbon (Fig. 4B, Fig. 7B).
3.Insulate the structures which are not connected to the main pathway, with rubber, ABS plastic, aluminium, etc. (Fig. 4C, Fig. 7C).

I am repeating myself, but it is important that you do not undertake vibration absorption using a series arrangement at any place between the entry point of the sound and the point where the sound exits the speakers (Figure 7A). If you put a damper at any point here, the level of the sound rise will be that of the damper material. The electronic circuit also becomes a series damper when applying negative feedback. 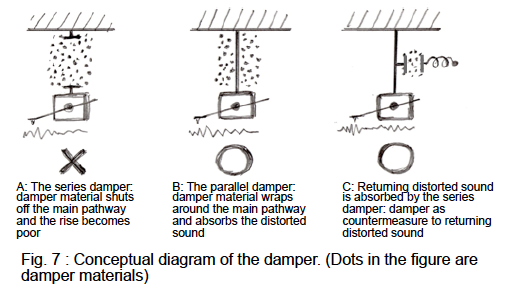 ‘Simple is best’ when it comes to taking counter-measures against reflected sound
The loss portion of the distorted sound transmitted along the main pathway creates vibration of the various structures of the arm. This vibration sound returns to the cartridge as a reflected wave, and sits on top of the power generating signal of the sound.
In order to prevent this reflected sound, firstly it is necessary to simplify the structure; secondly it is important not to make a structure that easily vibrates like a spring; thirdly it is essential to remove unavoidably vibrating objects from the main pathway, dampen with a soft material, and make it an insulated structure so that distorted sound does not return (Fig. 7C).

Despite awareness, there has been no commercialisation
There are many technicians who are aware of distorted sounds, and they produce equipment, but then end up withdrawing it immediately from the market. As the sound becomes clearer, the distortion of the peripheral devices becomes more apparent, so they withdraw the goods from the market, apparently because they are sometimes criticised for having bad products.
I would like to argue that, if we face up squarely to the issues I have already explained, and yet still do not pursue ‘original sound’, then I believe we have made no progress in electronic acoustics.
Having reached this great age, I decided to pick up my pen in order to explain my thoughts clearly and firmly to you. Thank you for your kind attention.